What is Hard Water

Hard water is water that has high mineral content (in contrast with "soft water"). Hard water is formed when water percolates through deposits of limestone and chalk which are largely made up of calcium and magnesium carbonates.

Hard water poses critical problems in industrial settings, where water hardness is monitored to avoid costly breakdowns in boilers,cooling towers and other equipment that handles water. In domestic settings, hard water is often indicated by a lack of foam formation when soap is agitated in water, and by the formation of limescale in kettles and water heaters. Wherever water hardness is a concern, water softening is commonly used to reduce hard water's adverse effects.

With hard water, soap solutions form a white precipitate (soap scum) instead of producing lather, because the 2+ ions destroy the surfactant properties of the soap by forming a solid precipitate (the soap scum). A major component of such scum is calcium stearate, which arises from sodium stearate , the main component of soap:

Hard water also forms deposits that clog plumbing. These deposits, called "scale", are composed mainly of calcium carbonate (CaCO3), magnesium hydroxide (Mg(OH)2), and calcium sulphate (CaSO4).Calcium and magnesium carbonates tend to be deposited as off-white solids on the inside surfaces of pipes and heat exchangers. This precipitation (formation of an insoluble solid) is principally caused by thermal decomposition of bicarbonate ions but also happens in cases where the carbonate ion is at saturation concentration.The resulting build-up of scale restricts the flow of water in pipes. In boilers, the deposits impair the flow of heat into water, reducing the heating efficiency and allowing the metal boiler components to overheat. In a pressurized system, this overheating can lead to failure of the boiler.

WHAT IS A WATER SOFTENER

A water softener is used to soften hard water by removing the minerals that cause the water to be hard. Water softeners are specific ion exchangers that are designed to remove ions, which are positively charged (mainly calcium (Ca2+) and magnesium (Mg2+). 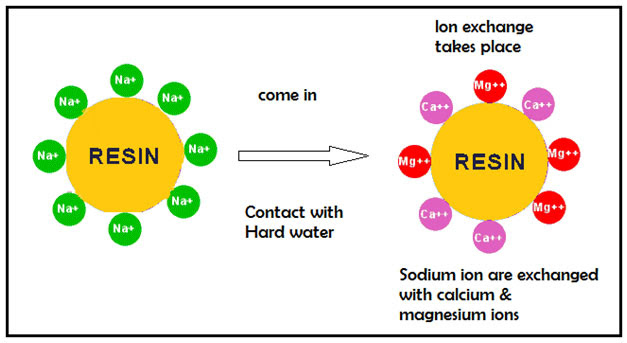 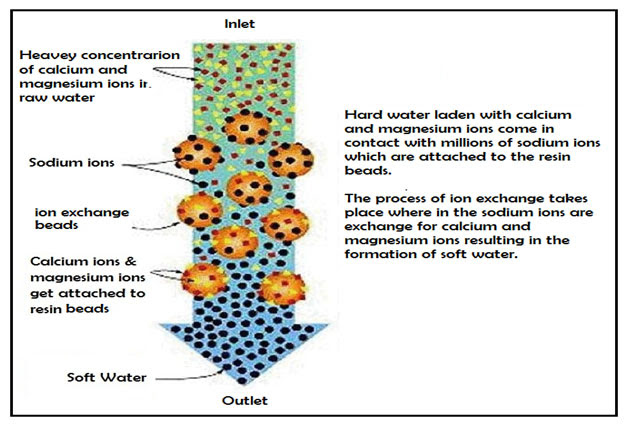 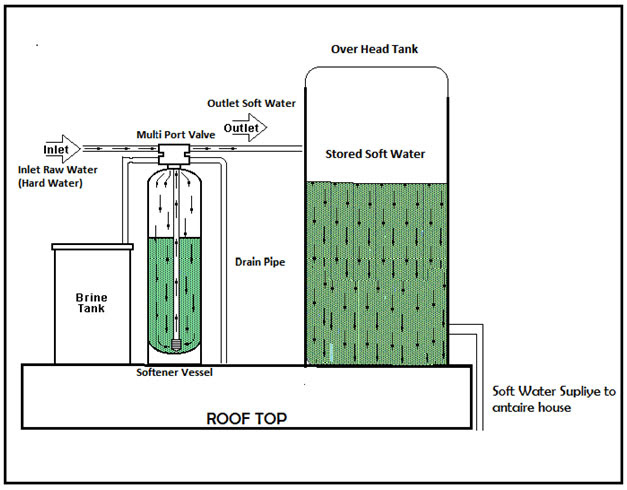 Water Softener – Service Mode When the water softener is providing soft water, it is said to be in Service mode.

During this Service cycle, water first enters the resin filled vessel from the top. The cations or the Calcium and Magnesium ions (hardness minerals) are immediately attracted towards the resin where the sodium ions are exchanged for the calcium and magnesium ions. Soft water flows out from the outlet.

This ion exchange takes place layer wise.(see diagram before) The top layer gets depleted of the sodium ions first followed by the lower layers.

Slowly the entire bed of resin is depleted of sodium ions since all resin beads get covered with calcium and magnesium ions.

Now It is time to regenerate the water softener resins. 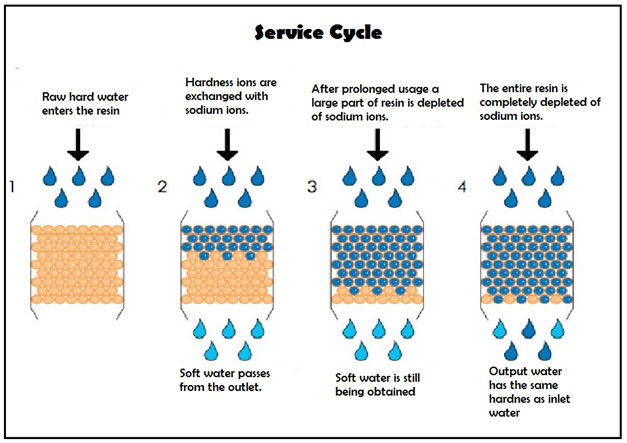 Hard water causes wastage of soap. Precipitate of magnesium and calcium soaps adhere to the fabrics and cause problems.

Water containing nitrates,sulphates and alkali carbonates causes difficulty in crystallisation of sugar. Moreover the sugar so produced may be de-liquescent.

Water containing chlorides and sulphates if used for concrete making effects the hydration of cement and the final strength of the hardened concrete.

For steam generation boilers are invariably employed.If hard water is directly fed to the boilers a number of troubles arise such as scale and sludge formation , corrosion, priming and foaming and caustic embrittlement of the boiler.